emeka4 in #sportstalksocial • 4 months ago

European champions Italy and world number one ranked team Belgium went head to head for a third place finish as the match saw the "Azzurri'' coming out victorious after a 2-1 win against the "red devil's" Belgium in a hard fought battle. 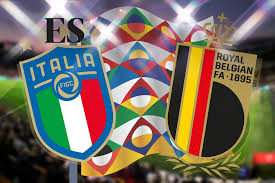 Despite the two teams having failed to make it to the UEFA nation's league final after both teams lost in semi's to make it through had to battle for a third place finish. The match was a heavy but to crack as both team shows intensity of winning with the style of play been played but Italian were the better side as they came out victorious.

Italy manager Roberto Mancini became the fastest Italian manager to secure 30 victories for the ‘Azzurri’ after another 2-1 victory over Belgium in the UEFA Nations League third-place playoff.

However, the ‘Red Devils’ goalkeeper was involved in the match that saw him stop several shot to prevent the Italians from scoring. The Real Madrid stopper prevent an opener late in the half after blocking Juventus Federico Chiesa’s effort with his feet to prevent an opener.

The game really showed a lot of quality as both teams showed effort and beautiful play to secure the winner but both teams defence wasn't easy to crack as both team played a goalless draw in the first half. 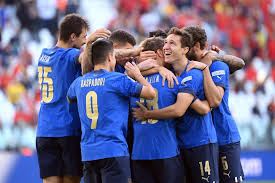 The second half also started in a good note much like the first period but the Italians eventually found the breakthrough just one minute into the beginning of the second half after Nicolo Barella once again proved a familiar foe for Roberto Martínez’s Belgian side, after he struck a half volley from the edge of the box with Courtois's outstretched couldn't get to the ball.

However, with a second defeat could see the Belgians knocked off the top of the FIFA World Rankings, with the Italians going one goal up Belgium manager Roberto Martinez made a substitution bringing in Manchester city's Kevin De Bruyne shortly after going behind to inspire his team into action. Despite the substitution been made the Italians doubled their lead with a penalty being awarded to them after Timothy Castagne was unable to stop Chiesa’s inside the box bringing the Juventus forward down, then Berardi stepped up to take spot-kick to put the "Azzurri'' two goals up. 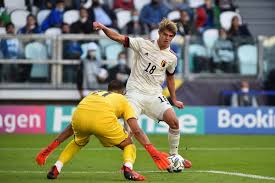 Belgium got a consolation goal after Charles De Ketelaere scored on his international debut but wasn't enough get back to the match as yet their wretched record against the Italians in major competitions now increase at six matches without a win.