emeka4 in #sportstalksocial • 2 months ago

It's been a weekend of shocker, surprises and unexpected results as big teams lost in the top six league in Europe.

Paris Saint German with their prolific start of the season lost away to Stade Rennes in a 2-0 defeat with the home side putting an end to psg unbeaten run in the league. 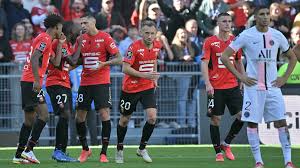 PSG who started well in the French ligue with a fantastic record winning eight straight games in a row saw that blow away against Rennes in a 2-0 loss.

Rennes however, maintain an impressive play against table toppers PSG forcing the away side to a frustrating style of play and revert back on the counter.

Not doubt psg were the Possessive side with the most dangerous attacking lineup but failed to deliver results as they couldn’t help to push themselves with a win or even securing a draw. Both Neymar and Kylian Mbappé were wasteful in scoring opportunities right in front of goal. Lionel Messi had a wonderful free kick as his 25-yard curler struck the crossbar but yield to nothing.

PSG continue the pressure on the home team as Neymar and Ángel Di María began to put more effort but all went to no avail.

Rennes eventually got the opener as laborde's goal went past Donnaruma in goal to put the home team in front in the 45th minutes just before half time. 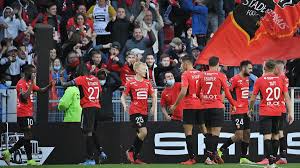 With the sudden surprise and shock from the home team putting PSG under pressure to comeback to the game saw that failed as Rennes were equal to the task to maintain the lead.

The victory against PSG however, equal Lyon’s record of most wins [5] against PSG since the beginning of the Qatari era, and at the same time ends Paris Saint German eight consecutive winning streak in the French ligue 1 campaign.

Another upset happened in Spain as Real Madrid were defeated away from home to a stubborn Espanyol side losing the game 2-1 in the Spanish league.

Real Madrid who lost to sheriff Tiraspol in the champions league are yet to regain confidence as they have now lost back to back games with the same scoreline within four days. Real Madrid who were unbeaten in their last seven games, winning five games then draw two saw that come to an end against Espanyol.

An unexpected results as strong Espanyol side recorded a deserved 2-1 victory over Real Madrid, which saw the club record their second win since their promotion to the Spanish top-flight this campaign. 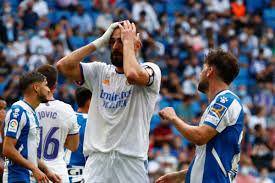 Real Madrid were the better side in the opening half as Karim Benzema was the first to threaten with two goals scoring opportunites but saw that effort wasted as Espanyol defence were equal to the task to stop him.

With Real Madrid not utilizing their chances, Espanyol went in front with a beautiful team move which saw Espanyol Raúl de Tomás put the home team one goal up. France international Karim Benzema scored a consolation goal for the visitors with a magnificent and wonderful strike goal from the edge of the box to make it 2-1. 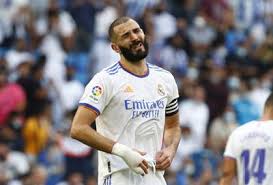 But that goal wasn't enough to secure points for Madrid as Espanyol hold on to their well deserved victory and putting an end to Madrid unbeaten run in the league.

The German bundesliga saw German champions Bayern Munich lost to Eintracht Frankfurt in a 2-1 loss to the away side, which saw their seven game unbeaten in the league come to an end. Bayern who have started well this season in all competitions were defeated at home at the Allianz arena.

Eintracht Frankfurt were the better team of the day claiming all three points in an unexpected results in the Bundesliga season, as they snatched a well deserved victory coming from a goal down to secure a 2-1 victory against Bayern Munich. 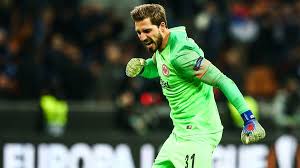 Eintracht Frankfurt goalie Kevin Trapp was the hero of the day, stopping numerous shots from the home side to score.

Goretzka put table toppers Bayern Munich in front in the 29 minutes , with Robert lewandowski providing him with an assist to put Bayern Munich one goal up in the game.

However, that goal did not last long as Frankfurt levelled up some minutes later as Martin Hinteregger did the scoring for the visitors. Bayern Munich started the second half with a good note as Lewandowski’s effort was denied by Kevin Trapp. With several attempts all was denied by the Frankfurt goalkeeper.

After missing on several opportunities and failing to utilize chances, Frankfurt scored the winner as Filip Kostić scored the winning goal to a dramatic comeback win for the visitors.

We move to the dutch Eredivise where almighty Ajax were defeated at home to Utrecht in a 1-0 defeat ending the club unbeaten run and perfect start o this season campaign.

Ajax who came into the game with a perfect start after their last outstanding in the Champions League with a 2-0 win over Turkish giants Besiktas on Tuesday were ready to face local rivals Utrecht in the league. 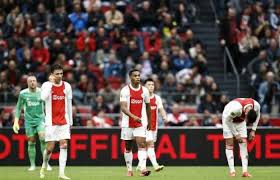 Ajax who played host to Utrecht side who they have beaten in seven of their last 10 encounter between the teams on home turf failed to secure victory as they lost to the away side.

No doubt Ajax were the better team in possession but failed t convert most of their chances against their visitors at home.

The half time ended in a goalless situation as both team headed to the dressing room for a better results in the second half.

However, Ajax maintain their prolific style of play in the second half as they continue to mount pressure on their opponent in search of a goal but wasted most chances.

Despite the pressure It was Utrecht warmerdam that put the visitors in front in the 77th minutes of the game to secure all three points. Ajax pushes hard in the game to prove something or get a point in it but failed as Utrecht defensive play were capable to maintain the three points and to put spoils in Ajax unbeaten run.