Bought and powered up another 1000 LEO.

niallon11 in LeoFinance • 4 months ago

What can I say?. Prices are tempting. 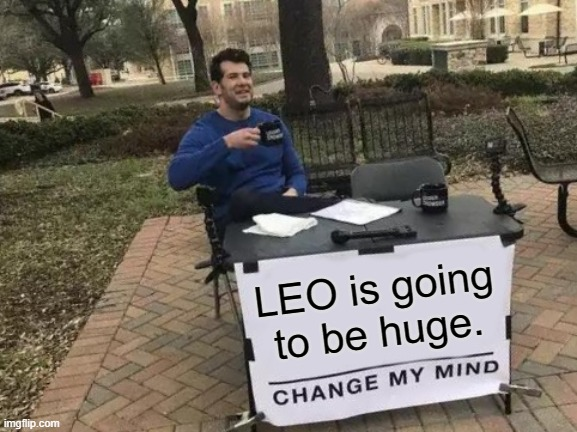 Now I don't know much about crypto....

I don't know much about crypto or writing posts....

But I have followed a lot of people who know exactly what they are talking about.

It's true because they told me on the twitter.

Some of them were even good enough to send me special opportunities through discord so it's been a lucky month.

So what these experts have told me is to follow their tips and I will make millions.

Now my dad is like myself. He also knows nothing about crypto but he has always told me two things.

That money doesn't grow on trees and that there is no such thing as free money. He obviously does know nothing about crypto as that is how the whole industry operates.

Strange people, making free money from thin air. That's why he doesn't own any bitcoin. To be fair, at the moment I don't own any either.

Free money is great but bitcoin doesn't do anything.

Even if it hits a million some day that is not a great return over the next few years. Bitcoin is up a whopping 15% over the past 12 months. Hive is up 850%.

Plus it's a lot more fun and you can keep earning more every single day.

So while I might not know much about crypto I am going to back the projects that actually do something.

So even with my limited crypto knowledge, there are a few things that stand out from the project.

It's the one of the main reasons why I have so much faith in the hive eco-system and the other tokens that i have invested in. It's all about that use case and being able to see where the project is heading.

They have set ambitious goals but have delivered so much over the past couple of years that it's hard not to believe in the growth potential for the next few years.

When i believe in a project then i want to go in big to it.

Some of this will be earned but it's impossible to get there without buying part of the stake if i want to be successful.

I started the year on 15,000 so there is a long way to go but every week is another chance to earn more tokens and stack for the future.

With prices at just 16c it is a good time to get started as these could shoot up if we every do see project blank launch or the upcoming Matic cross chain links from cub.

Slow and steady wins the race.

And i'm incredibly stubborn. So no matter how long that it does take i will keep grinding up the levels to reach that target.

The price of LEO at these prices are definitely a steal. The only downside about the team is the massive delays. We got pretty much no schedule set and things get pushed back often. Of course the development is crazy and it is definitely doing a great job.

The delays are annoying but at least they are delivering on their promises.

That counts for a lot in this space.

I'll back that any day.

2022 is the year of Hive ecosystem for me. I moving more investments and time into the platform and its projects. I was spread thin in 2021 and it made me make some stupid moves that lost me a good deal of money. I need to focus on a few things and do them well.

I think it might even be 2023 when we see alot of the awaited projects launch and gain some traction but we are moving in the right direction for sure.

With a little more hype and a few more devs the ecosystem will really kick on over the next couple of years.

I'm all in with hive now and building as much stake as possible.

I'm moving more of my focus on here to build more relationships and community. If we do that gains will follow. I'm starting to research more of the up coming projects and I'm pretty excited. There's too many pump and dump projects on so many chains I'm hoping we are different and can follow in splinterlands successes.

Freakin A LET'S GO!!!! Now you got me pumped up to buy more. I keep going back and forth between CUB and LEO I need to just make up my mind and max one of these out asap.

We all know how fast that things will jump when things line up. LEO is doing so much that it will happen at some stage and now is the time to stack.

It's a tough call but im happy with my CUB stake for now so want to pump up my leo a bit for the year.

It's an exciting year.

I am doing the same thing !

Quite the goal. Best of luck. I would like to see Leo do well. The delays are a bit amateur though. Not sure what the reason is. But I suppose thats the same as all new crypto. Glad price is low so I can still get in.