Understanding The Grand Picture Of Crypto 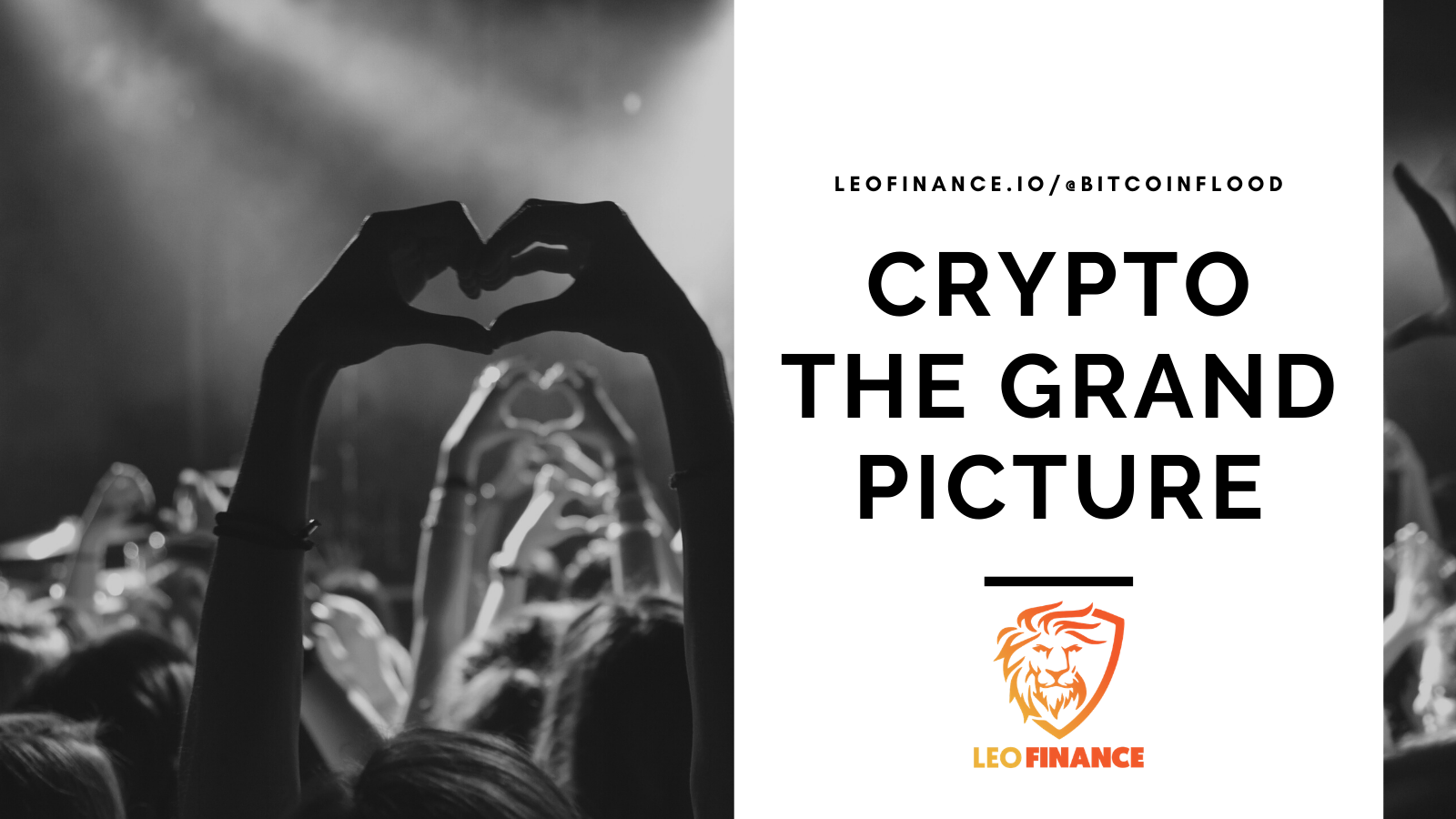 A short little history lesson. Many years ago a new cryptocurrency was born called Bitcoin which was worth pretty much nothing until one day someone exchange a pizza for 10,000 bitcoin (currently worth $576,000,000) Yep half a billion dollars you'd almost be a billionaire yourself if you made that trade and held on to it for that long.

Why do I bring this story up?

Because many cryptos such as Ethereum, Hive, LeoFinance, Doge and more all at one time started as having little to no value and over time grew up to be monsters in terms of price. This is why you need to see the grand picture and start stacking. LIKE SERIOUSLY STACKING!

What you stack today in Ethereum could easily triple or better by next year. What you stack in Leo or Hive could easily rally 500% + all that's waiting for it is enough use case and publicity to drive demand for the cryptocurrency up.

We are now in times where if someone sees a 10% rally they laugh! Yeah LAUGH! This use to be huge in the stock market and it's why many are leaving and now coming to crypto for those sweet sweet 100% gains.

We now have use cases galore which are just starting out.

Gaming is one of they highest transacted assets and fits perfectly with NFTs. Imagine when a platform such as Playstation, Xbox or MMO launches and uses blockchain for it's assets. Allowing for a market to freely trade digital assets which represent something in their virtual MMO world. Do you not think that would drive prices up even higher and put more demand on ownership and blockchain?

Imagine a time when you no longer deal with a bank but instead use DeFi to finance your house, build capital and freely trade with others collecting the loaning fees yourself instead of a mega corp.

Yes all of these cases are only a year or a few years away and it's why I highly encourage you to stack as much as possible. Even though prices might seem high please bear in mind Crypto still is only 1/10th the value of all the gold in the world and 1/1,000th the market cap of the stock market.

Personally I don't think Bitcoin will make it instead that money will start flowing into other projects with lower fees, faster chains and more use cases. I know I know, It wont happen tomorrow but with Bitcoin making no advancements it's simply a store of value and honestly nothing else. Sure funds will still flow through Bitcoin but they will be large bulk moves by business and corps as it's the most successful but also as far as we can tell one of the most secure block chains as it's been battle tested over the years.

What is your grand picture of crypto? Will you start stacking or will you keep moving funds around trying to chase the next lucky rally?

The amount of uses cases for crypto and blockchain are huge and we are just starting to scratch the surface of that. As of the last 2-3 years is the only time we have seen some real development going on primarily in the case of NFTs.

We then saw DeFi about a year ago but it wasn't until the last 6 months we really saw a flow of capital into the markets and that new capital is fueling thousands of new projects. As money flows in it drives demand, hype, engagement and development. Without those things it's a slow growth winter.

You could almost compare this to the internet. It was slow sluggish and not used much until AOL brought it to the masses. While that was a start up it was slow limited and a spam fest. I kind of consider 2017 to be AOL while today is the likes of starting up cable and wifi. We are just now building the groundwork for crypto.

Each time I read posts like yours it broadens the realities of how insanely epic all this is. One minute I feel like I missed the boat and then the next, it's impossible to believe it is when this is just the very beginning. With that said, stacking is the equivalent of when I was younger and family members and older folks used to tell me save your money, put money away, invest in 401k, etc. and as a youngster all I cared about is today not tomorrow. Now at my age years later, I actually have a chance to make up for all those years combined.

Stacking, taking some profits too.. and gaming lole a madman! 😁 Splinterlands and Alienworlds have such huge potential, its insane the money you can make just by having fun!

I say only take the profits if the getting looks too good like in the case of Doge (at least that's my opinion) or if you need the Fiat for some reason. Besides that keep building. Cool thing about hive is the more you stack the more influence you have on the platform and the more you can earn. This is about 4 years of work/ investing for myself for what I have right now.

Splinterlands is doing great but it's not only just on hive it's spread out to other blockchains which is fine. It still brings awareness to hive. I've tried selling some of my cards on Wax so far but without any luck the demand for them still seems a bit low. Alienworlds though is killing it and it's legit the most simple game ever lol that's what makes it so popular I think. Easy but can be complex if you want to dive into it more.

I think AlienWorlds is one of the proofs of the NFTS crazyness, if they can make all that is on the roadmap I have no doubts the game will be huge.

Yeah Alienworlds is legit such a simple game and the simplicity of it is what makes it awesome that so many people could jump in and get started.

This is important stuff. I think its time to start stacking with conviction, you're right

I'm still shocked by people that tell me they are going to buy doge lol but oh well too each their own if that's what they believe in. Who am I to say Doge wont triple in value again. Landing it on the moon as the first cryptocurrency ever to visit the moon? lol imagine that day. Thing with crypto is anything goes and that honestly feels like the case with the stock market. However there are a lot of cases where you can stack crypto for "free" I say free but you exchange time for it so it's almost like a job. Anyone that's still out of a job from layoff's I'd say invest all that time into Hive and other projects like it and stack stack stack. 2-3 years from now you most likely could retire and live your dreams.

I really hope that is the case for us in a few years. I think that anything is possible you are exactly right. I try not to give advice anymore because every time you say a coin is trash it shoots up 300%. Everyone is a genius in a bull run

Totally agree, staking now could make you a very wealthy person down the line.

With advances in blockchain gaming, social platforms and NFTs, we are only touching the surface and it is entirely possible that we will see many times the price over short periods.

But also almost certainly that any tokens or coins staked today are going to see many times there return ovee the coming years.

Now us definitely an exciting time to be involved in crypto at any level.

What is your grand picture of crypto?

A way to achieve financial freedom and the basis for new technology in the future. I think use-case will be what decides what will succeed in the future and just like how people flocked towards Robinhood in the beginning, I think people just prefer smaller fees. Its also one of the reasons why I like HIVE and WAX because of the RC or CPU/NET system. Not only does the HP or CPU generate you returns, it allows you do transact more on the block chain. Also there are feeless exchanges such as HE or Alcor.

Will you start stacking or will you keep moving funds around trying to chase the next lucky rally?

I will continue to stack and I have decided to move some more of my generated WAX from selling Aether into CPU to generate me more network resources. At worst, I can take it out after a few days by unstaking. For HIVE, I plan on building on HIVE and stake more rewards to generate more. Either way by using both sources, I plan on building some extra sources of income.

Hello I am very new to this world of cryptocurrencies, however I am learning step by step as it is a reality that we can not escape. I thank you for this post, it helps me to understand a little more this cryptographic framework, but above all it has allowed me to understand the importance of investing and trusting in HIVE, because a great future is coming.

Points Boosting refund to @bitcoinflood! 🤓
Due to one of these reasons:
1. Post is not published via Ecency.
2. Post is already curated by our team.
3. Post is not curated by our curators within 24 hours.
4. Post might be too old post, try more recent content.
5. Author already received vote in last few hours, try again later.
Install Android: https://android.ecency.com, iOS: https://ios.ecency.com mobile app or desktop app for Windows, Mac, Linux: https://desktop.ecency.com
Learn more: https://ecency.com
Join our discord: https://discord.me/ecency