bitcoinflood in LeoFinance • 4 months ago 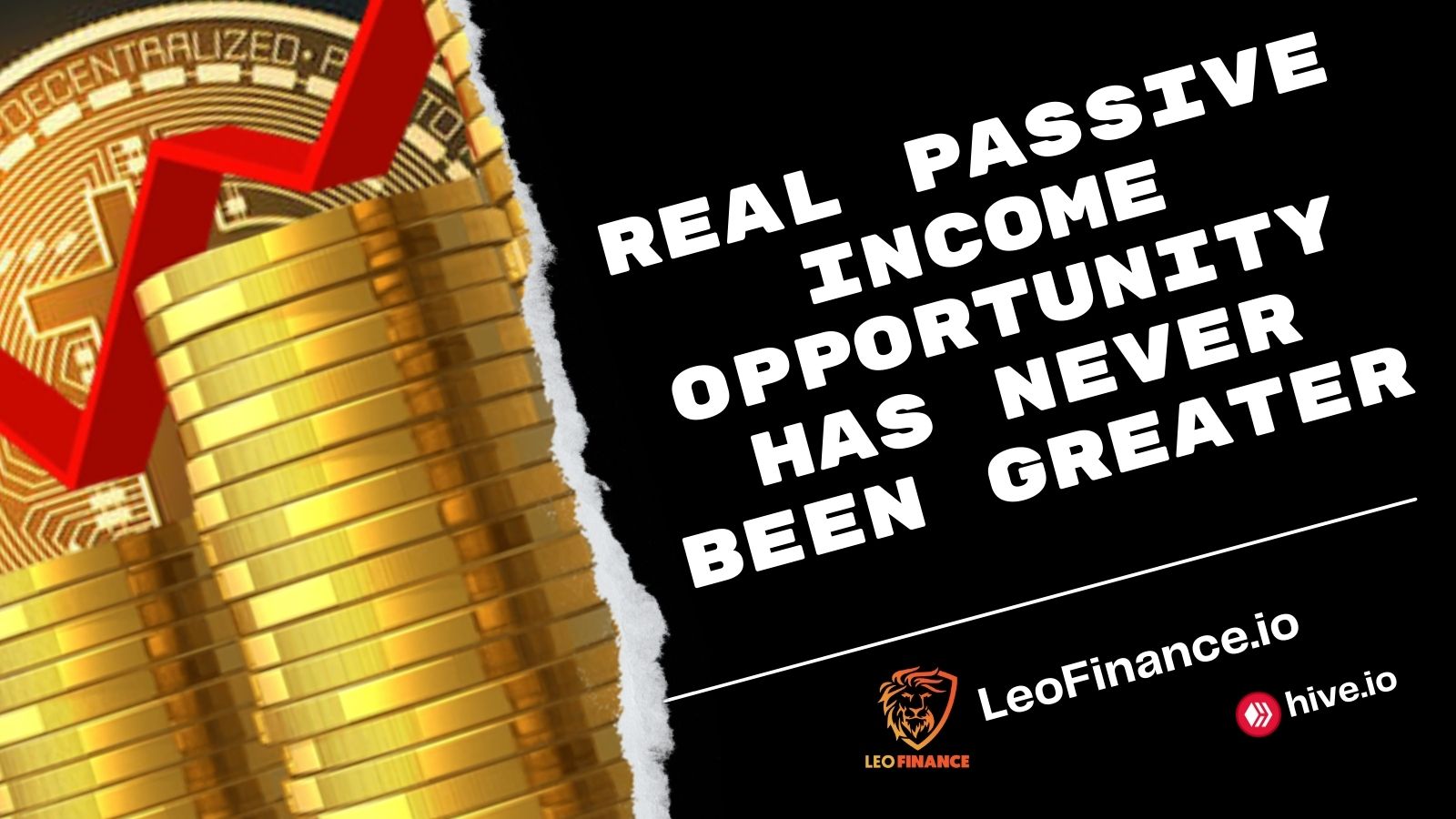 I think one of the coolest things ever is when I stumbled upon real passive income and what it means. Most people will tell you passive income is something you set and forget that continues to build you wealth over time.

However that couldn't be further from the truth and when you finally realize that you'll be better off. So what is passive income and how does it apply to the Hive blockchain? Let's talk about it and a few options you have yourself to get started in it.

What Really Is Passive Income?

Unlike what many have told you passive income is the creation of a asset that takes minimal work after and continues to generate revenue. For example in a business you might create a course that takes you time to create. However you then through some work and overall general business marketing continue to sell that course creating revenue for you or passive income. It requires less work of you now then it did before and continues to generate sales.

In finances money can be applied to be "passive" such as putting your money into a dividend stock or a savings account. This generates revenue for you however many times it doesn't beat inflation and some higher dividend style stocks come with risks. Each of these still requires some level of work to watch and manage those funds.

How Does This Apply To Crypto and Hive?

Hive is one of the coolest blockchains in my opinion. It offers pretty much everything and does everything rather well.

Below are some of the things I do myself to create passive income here on Hive but of course there are other options and new ones coming along each day.

I love blogging and reading others blogs. There's just a huge wealth of information and unlike news articles that are water down or have some weird overall agenda blogs allow me to connect with people on a more personal level and get feedback and information from people doing it every day.

With writing a blog post or two a day I open them up to votes here on Hive but also communities such as LeoFinance.io that allows me to earn hive and other tokens. While this isn't really passive income in itself it does generate capital which can then be used for passive platforms.

You'll also earn a passive like income from doing curation which is voting on others posts you feel are deserving of your vote.

But not only that Hive pays out around 2.5% APR on hive staked and a massive 20% APR on HBD it's stablecoin. While LEO will soon be introducing ad revenue passive income to staking holders.

Splinterlands is a beast of a game and the play2earn aspects of it are there. What I really love about this company though compared to other Play2earn games is the commitment to building something great, trying new things while also adding in items that provide tested value.

Splinterlands last year introduced the SPS token which is the governance token of the game. It's the core of the game and everything revolves around it. These types of games offer up passive income in the shape of staking rewards much like you would see in a PoS Proof of Stake cryptocurrency. However with gaming it offers up other bonuses such as perks to land owners, votes, more SPS and vouchers which can all be used or sold to generate passive income.

Some other notable passive income play2earn games would be...
Hive Blockchain
RisingStar
DCrops

These games will take some assets up front but through playing the game and staking tokens you'll start to generate passive revenues.

Most likely the granddaddy of passive income DeFi offers up huge potential in the form of you becoming your own bankers. However the issue now is there are so many banks and liquidity and action is low. This slows everything down in terms of fees collected and so forth thus many of these tokens are trading at record lowers.

The core DeFi platforms I use for myself are
PolyCub which integrates with Hive, HBD (Hive stable coin) and SPS (Splinterlands governance token) along with other assets on the Polygon(MATIC) chain.

CUBDeFi This one is at record lows but I feel it still has potential a few months down the road to pick up a little steam.

What types of passive income do you enjoy making for yourself with Hive?

I work way too hard for most of the money I make... passive income is the smartest thing ever

There are quite a few opportunities to generate passive income here on Hive. DeFi has the highest ROI.

Hive is the biggest ecosystem for earning. There is many opportunities to make passive income. Games, defi, posts !

Hive and crypto opened up the room for higher amount of passive income than any stock or centralized finance, considering much less risk on hive stakes.

So true just imagine what those streams will look like during a rally!

There are many opportunities to earn passive income and the important thing is to take advantage of them. Normally, I wasn't very into games, but thanks to Splinterlands and Rising Star, I became a game enthusiast. :) I don't know if I will get the same pleasure in other games, but I will try them soon.

Frankly, LeoFinance, Polycub and Cub excite me more, I hope to make good profits from these in the long run.

Good information. Thanks for sharing.

Very true, there's much to take advantage of in this space. Passive income is real :)

Thanks for the suggestions. I dont know much about Wax right now.

Yep.
Good to see how Hive has evolved while users can earn a good passive income out here.