ablaze in Haveyoubeenhere • 10 days ago (edited) 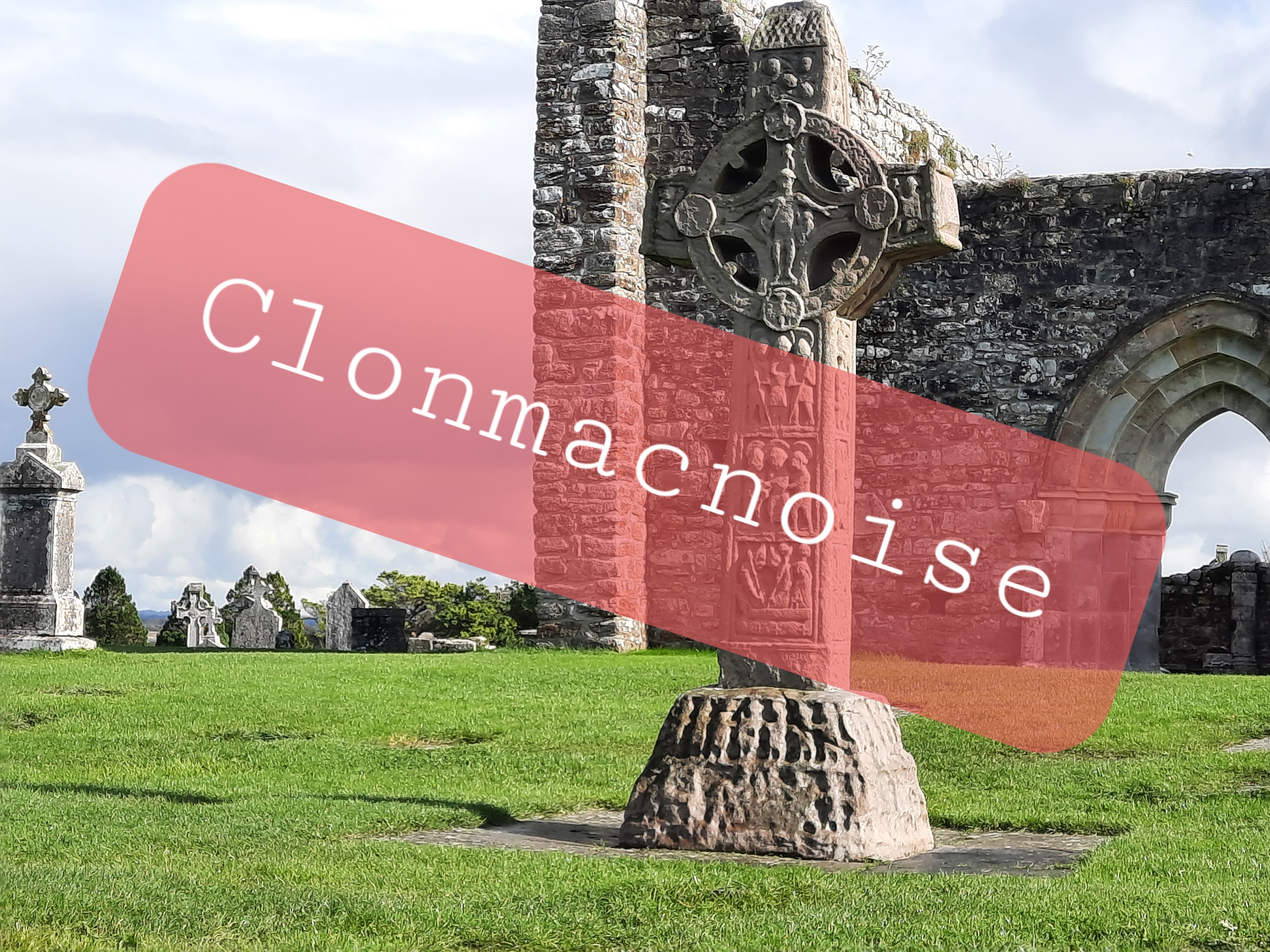 I remember reading about this ancient and historically significant site when I was knee high to a grasshopper back in my school days of yore. It cropped up again and again over the years that I studied Irish history in primary school and again later in life at secondary school. Having read and learned about something, it is always nice see it in the flesh, to walk it, touch it, smell it. When it comes to Clonmacnoise, it was only last week that I finally got to see it with my own two eyes. That was a special moment and what made it even more special was arriving by boat like so many did 100s of years ago. There is something very different about arriving someplace by boat. Your point of interest appears gently on the horizon and you ease up to your final destination slowly. 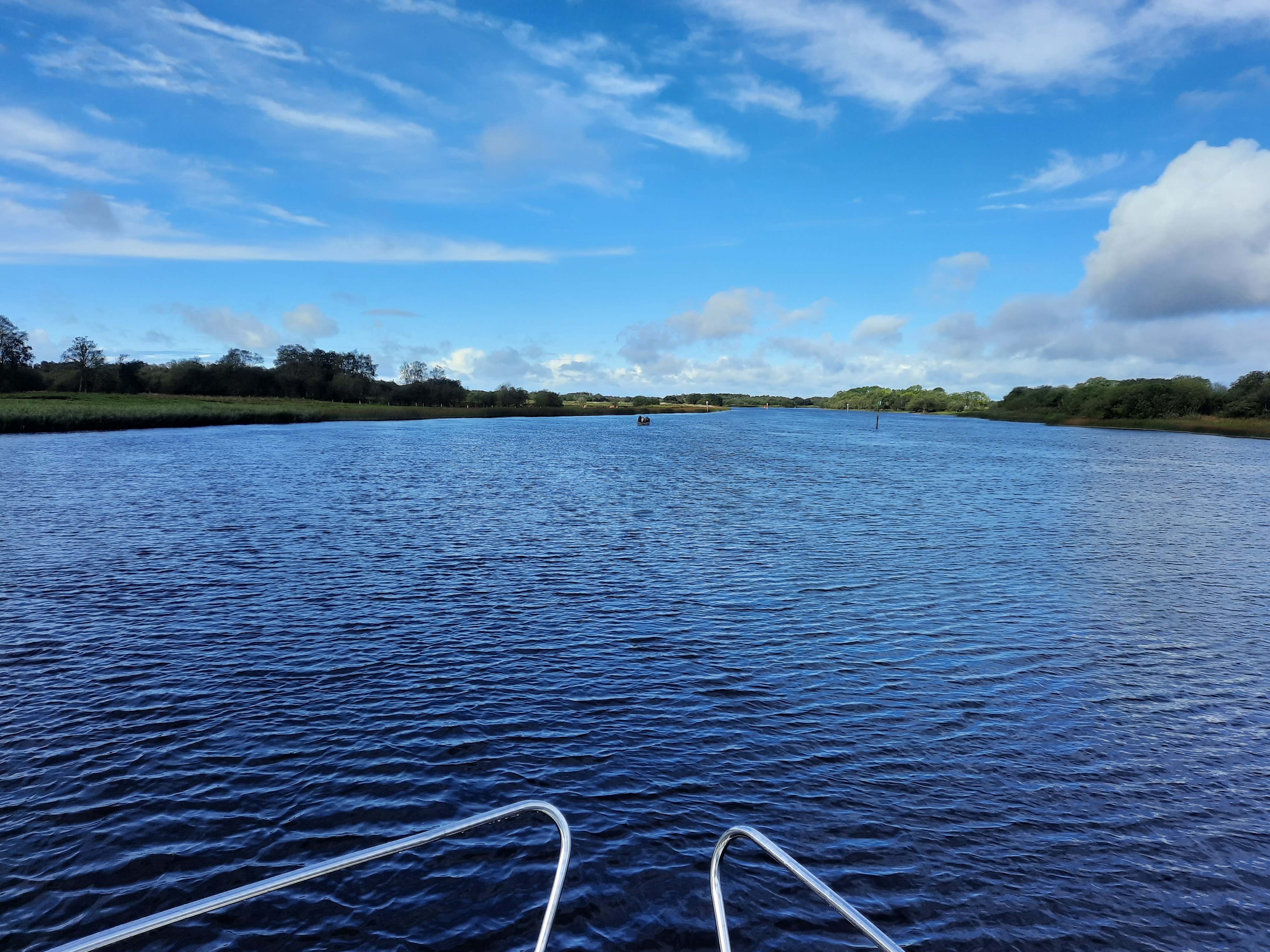 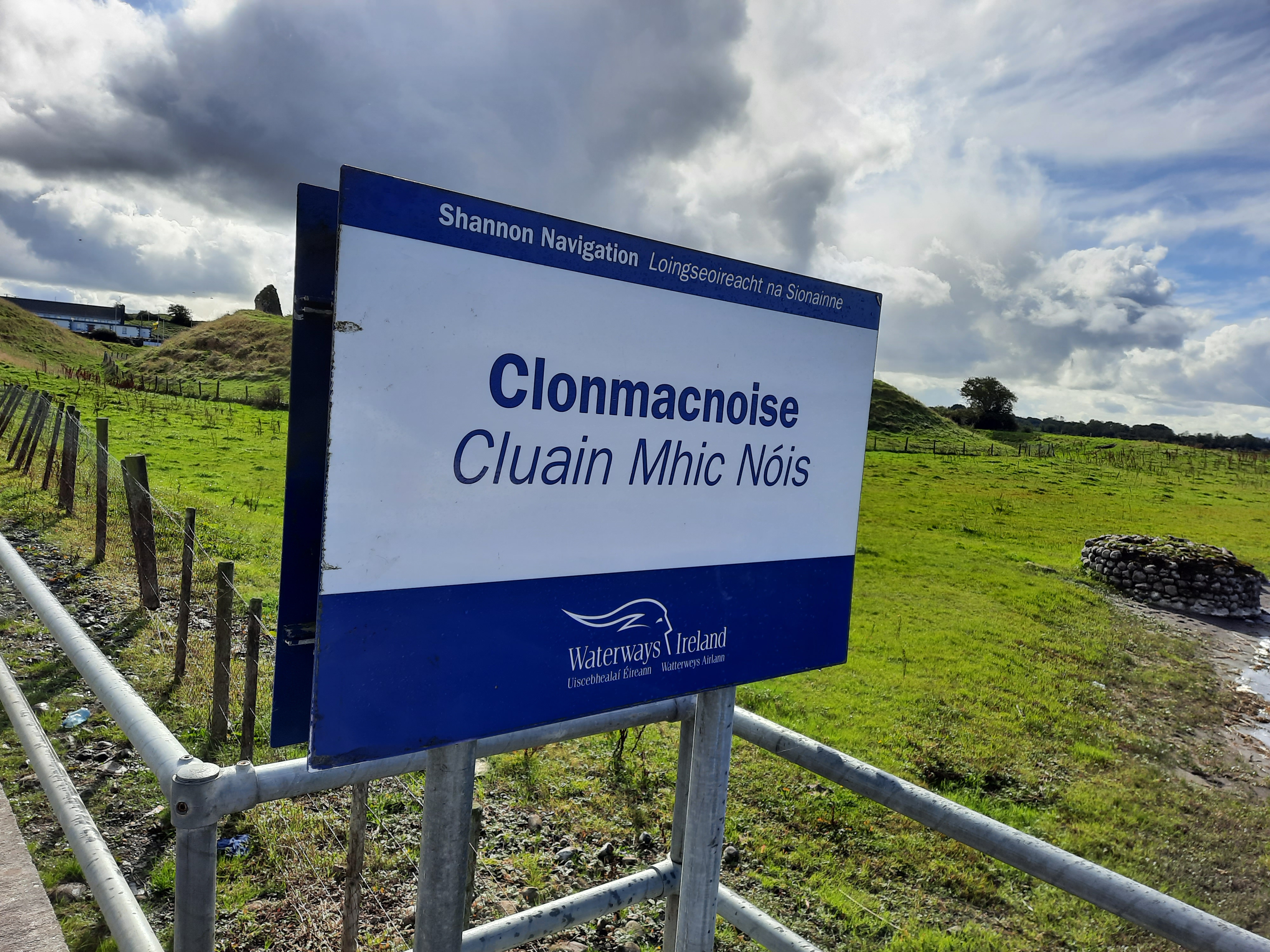 Way back in the year 544 a young man from Roscommon, named Saint Ciarán arrived at this location with seven friends. It was here he met the legend Diarmait Uí Cerbaill, who was a High King of Ireland in later years. The first church was built upon this site, a wooden church of simple structure. It was the first of many to be built on this site by the men mentioned above. More small churches were clustered on the site in the following years. This location was important historically as it was the major east–west land route through the bogs of central Ireland, crossing along the Eiscir Riada, a glacial esker left behind by the last ice age. 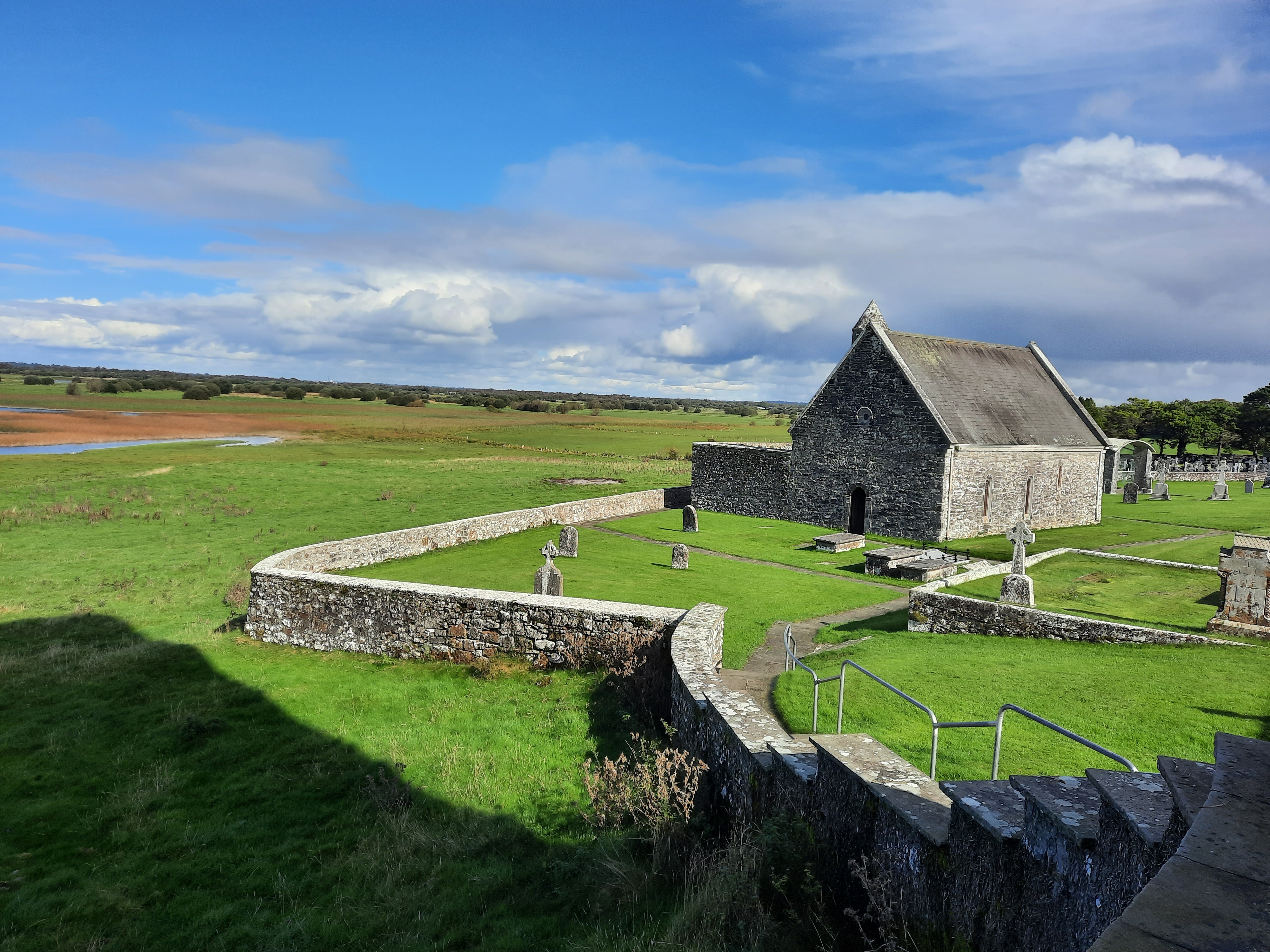 Clonmacnoise remained a spiritual centre and central point in Irish Christianity over the coming decades, though, Clonmacnoise's period of greatest growth came between the 8th and 12th centuries. It was also a time of worry and trouble for it's inhabitants though, as it was also attacked frequently during that time period. The vikings and the Normans were the main culprits. The 10 men that started the dwelling place would have struggled to repel the invaders, however the population swelled to approximately 2,000 by the 11th century, so they were able to protect themselves for the most part, although I'd say it was a full time job keeping the Normans and the Vikings at bay. The 2000 strong holding were not just holy men, but also metalworkers, craftsmen farmers and others who supported the monastic clergy and their students. The monastery ruins were one of the stops on the itinerary of Pope John Paul II during his visit to Ireland in 1979. That gives you an idea of how important the site was, as the Irish people of 1979 would have had the highest regard for the Pope and Pope John Paul II was particularly revered.
The site still includes the ruins of a cathedral and seven churches. There are also two round towers, three high crosses and a large collection of Early Christian grave slabs, many of which are defying gravity by staying somewhat upright. There are a number of notable and famous stone crosses on site, which have really stood up to the test of time. The most famous, the Cross of the Scriptures, also known as King Flann's Cross, is the centre-piece of the new interpretive centre. This cross is decorated with figure sculpture on all four sides. Imagine the time and craftsmanship that went into sculpting these impressive crosses all those years ago. I read on a sign that "the Cross of the Scriptures was mentioned twice in the annals of the Four Masters, first in 957 and later in 1060" At the bottom of the shaft is an inscription that has now become almost impossible to see. I looked it up on line and it reads: "OR DO COLMAN DORRO .....CROSSA AR RIG FL.ND". It was a prayer for Colman who had the cross erected here. The Gothic-style arch visible in the background here would have been the entrance to one of the seven churches. 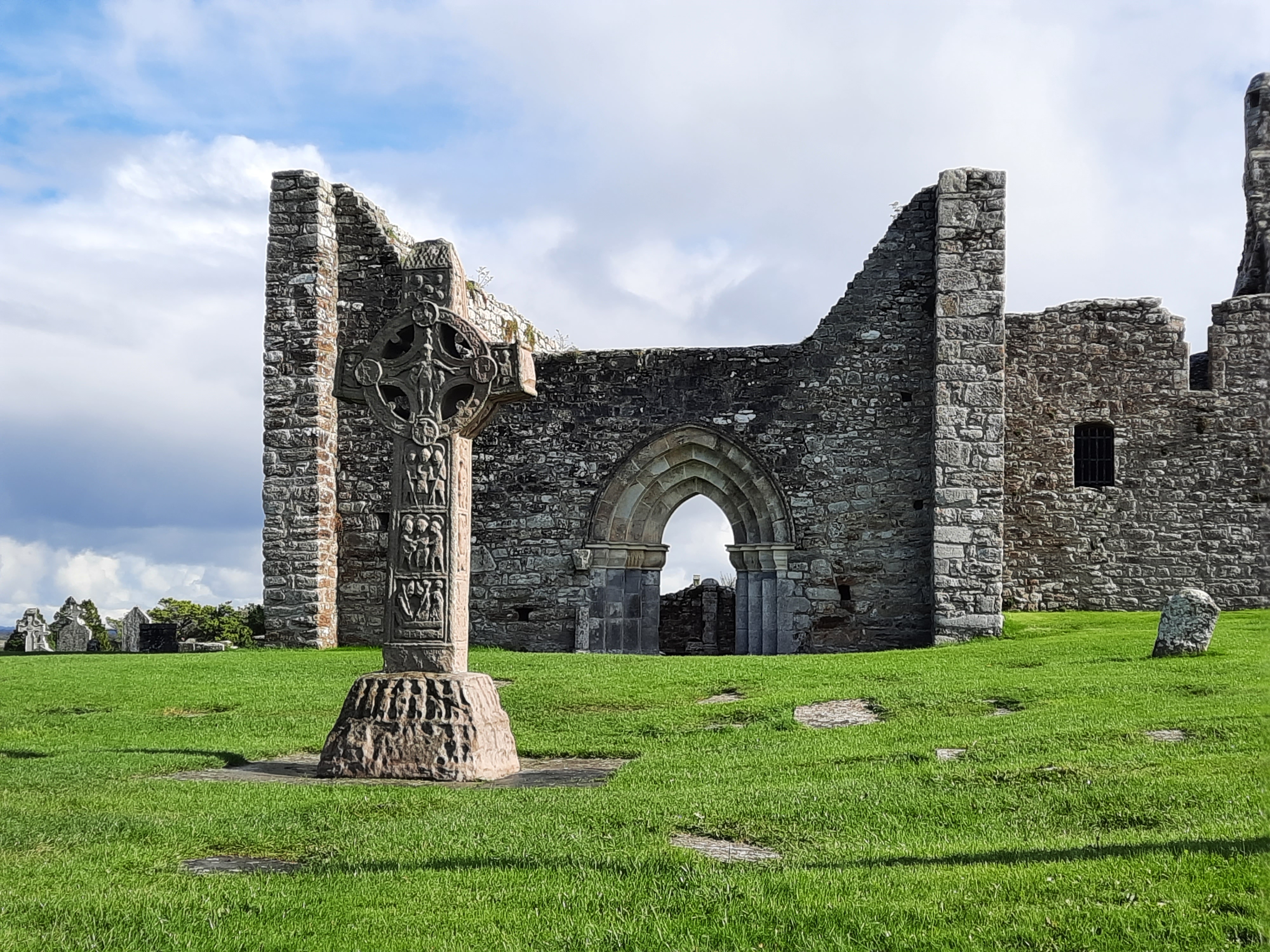 This castle may have once been a fortress, but today it looks as though a puff of wind could knock it over. It is somehow semi standing, but one would imagine it's only a matter of time until the whole thing comes crashing down. Something about it and the obsurdity of how it is poised make me think of this genius Monty Python sketch 🤣🤣 Thanks as always for stopping by.

Good stuff, it's a lovely part of the country. It was amazing landing at places by boat, like so many would have centuries ago. We had a great night out in Shannonbridge, Lukers in one of the best pubs I've been to, what a little gem of a place.

Good guess, I think you're fairly close, if you add a couple of fadas, then it would translate to "for colman doro ..... Crosses of our king"